Jewelweed-What the heck is that?

Jewelweed grows all around the studio . .. 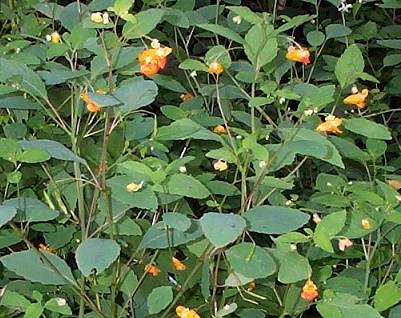 Some species are annual plants and produce flowers from early summer until the first frost, while perennial species, found in milder climates, can flower all year. Regardless of their lifespan, the largest impatiens grow up to about 2 meters (c. 7 ft) tall, but most are less than half as tall. The leaves are entire and shiny; their upperside has a thick, water-repellent cuticula that gives them a greasy feel. Particularly on the underside of the leaves, tiny air bubbles are trapped over and under the leaf surface, giving them a silvery sheen that becomes pronounced when held under water.

The flowers, up to 2–3 cm, around 1 inch long, in most species are made up by a shoe- or horn-shaped spur for the most part, with at least the upper petals insignificant by comparison; some have a prominent labellum though, allowing pollinators to land. Others, like the Busy Lizzie (I. walleriana), have flattened flowers with large petals and just a tiny spur that appear somewhat similar to violets (Viola), though these are unrelated eudicots. A few Impatiens species have flowers quite intermediate between those two basic types.

These plants derives their scientific name Impatiens (Latin for "impatient") and the common name "touch-me-not" in reference to their seed capsules. When the capsules mature, they "explode" when touched, sending seeds several meters away. This mechanism is also known as "explosive dehiscence"; see also Rapid plant movement.